Hey guys,
I wanted to get this thread started while I'm at work to see if anyone has any ideas for me to check on before I start really digging into the issue.

Like the subject said, I believe I am having some issues with the physical switches in my ball trough on Goldeneye. What's happening is for the last few days my multiball modes are ending 1 ball early. Then for the first time, my flippers went dead today while I still had a ball in play, this has never happened before this morning.

The other night I was looking into this a little and turned on the 'clear ball' mode which shows the locations of the balls in the trough and as you shoot them out you can see them move down the trough. While doing this I didn't notice any glitches with an extra ball showing up, as balls fell back into the trough i would see them in position 5, then quickly move down to 4, 3, etc. as far as they could travel. The progression down the positions happened very quickly and it never appeared that they 'hung' at any position.

I did confirm this is happening on both multiball modes. What is weird is that most of the time when I get down to my last ball I can still play until it drains (other than the one time this morning).

Any ideas as to quick fixes or anything specific I should look at? I can take pictures later tonight if necessary. Any ideas (or questions if you need more information) would be appreciated.

I dont recall, but is this trough one of the standard "roll over switches" setups, where each trough switch uses a small roller ball on the end of the switch? If so, it is very common that these need adjustment from time to time. My guess is that one is bent up a little too high, and is causing just enough tension to stay in the up position and keep the ball from rolling down. Even more of a giveaway is that it does this during multiball- less balls in the trough, less weight to move the balls down the trough.

With the coin door open, and the playfield down, empty the trough and slowly drop one ball into the trough at a time to see if it is hanging on any of the switches anywhere.
Current Collection
The Simpsons Pinball Party, Genie, Pennant Fever, Sinbad, NBA Fastbreak, Williams Phoenix
Top

Yes it has the roll over switches. I will try your suggestion tonight. thanks!
Top

Another thing to check on this is the opto at the very front of the trough. If the connector is worn or solder is cold and not making good contact, it'll trigger falsely, with the outcome as you described. I'd reflow the solder on the header pins, and reseat the connectors. If the connectors feel loose on the pins and the problem persists, they might need to be replaced.
Tron, Shadow, Shrek, STTNG, TZ, Dimension, TNA, Wizard, AFMr, Sinbad, Cosmic Gunfight, Mini Pool, R&M, King of Diamonds, Firepower II, S&S
Top

had a similar issue on my BW when I first got it. Ended up needing replacemnet opto at the front of the trough. The "jam" opto and "ball1" are registered with this and the board has a small chip that went bad. Notorius issue on these Segas.
Top

Looking at it more I really don't think its the opto. Goldeneye has 5 rollover switches where the balls sit until they are relasease to the opto and hit by the VUK and then a horizontal kicker fires it into the shooter lane. From what I have read, issues with the opto would cause extra balls to be fired out during play. I have attached a few pictures of the setup and the opto while the trough is full and you can see that the opto receiver is lit up even when the trough is full.

From more testing (i have a Link to a video of what i'm describing here: https://youtu.be/HbJYAHjSMmg ) I have observed that when using the clear ball trough that the 4th switch (starting with 1 on the far left) seems to register oddly when a ball is passing over it. You can see in the video at the 1 min 12 second mark a single ball is entering the trough and both the 4th and 5th switches are active at the same time for a split second, this is what i really think is causing the issue, but i'm really new to this so tell me if i'm wrong. I have also observed (at the 33 second and 1 minute mark) where this same 4th switch re-activates after a ball leaves the trough (with only 2 balls in the trough). It's hard to describe in text, so please refer to the video. These two things are making me think that either the rollover switch needs to have its height adjust (but i'm not sure which direction) or it's bad and needs to be replace completely.

Let me know what you guys think, again all the help is greatly appreciated.

EDIT: I forgot to mention, I am getting a technical alert that the i have a switch stuck open, its the magnetic flipper board... no idea what that means, but unless it's related to the issues describe before it doesn't appear to be affecting game play. 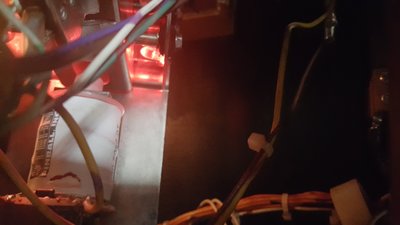 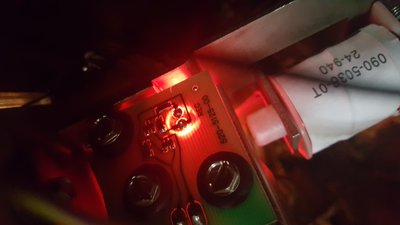 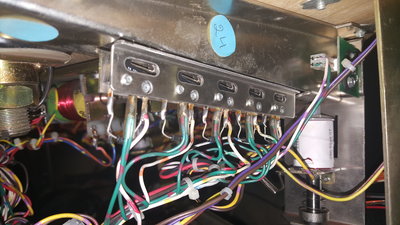 You are on the right track... wiggle the wires on that switch and see if one is loose or if you have a broken diode on that switch.
Current Collection
The Simpsons Pinball Party, Genie, Pennant Fever, Sinbad, NBA Fastbreak, Williams Phoenix
Top

All connections look solid, nothing loose, no breaks or cracks that i can see. Not sure how to check for a broken diode, but it does look just like the others.. no bulging or cracks. So I'm thinking its just an adjustment to the switch... which brings me to my next question... how can i get that switch out? Or do i have to take the entire trough assembly off? There are little slits where you can see the metal tab (leaf?) but the only thing i can fit in there is a small flat head and its really hard to tell if I'm actually bending it or not. The screws are extremely small (less than 3/16ths) and one is sunk in where there's no chance of any kind of adjustable tool getting in there. I would need to know how to get these unscrewed to replace the switch if its bad too.

I'm determined to get this glitch figured out! thanks!
Brandon
Top

Its the two hexbolt headed screws. There are two per switch. You can see them in your pic. They are facing forward.
Current Collection
The Simpsons Pinball Party, Genie, Pennant Fever, Sinbad, NBA Fastbreak, Williams Phoenix
Top

Also, there are small nut drivers that fit in that hole, but good grip strength and small needlenose pliers work as well.

There is no need to take thecswitch out to adjust the metal arm, you should be able to get some long needle nose onto that arm while installed.
Current Collection
The Simpsons Pinball Party, Genie, Pennant Fever, Sinbad, NBA Fastbreak, Williams Phoenix
Top

It sounded like there might be two different problems happening. Ending multiball with 1 ball remaining and then ending your ball early (flippers going dead). It could be that the same thing is causing both of them, but could also be different issues. Is this still happening consistently?

If you haven't already done so, pull and reseat the connectors on both of the trough opto boards. There's one in your picture and another receiver on the other side. See if the problem goes away. If it does, you've probably found the culprit and would want to fix those up. Testing diodes on the switches you'll need a multimeter for. The last ball dropping in trigger the last switch (10) to stay closed, as opposed to the 13/14 which would already be closed.

I did reseat the the connectors to both opto boards with no effect on the issue. The flippers going dead has happened only twice out of the last 20+ games. The multiball ending while 2 balls are still in play happens 9/10 times.

I did get a new 'clue' to the puzzle last night while playing. The ball save was active and while the ball was in normal play I performed a slap save and it triggered the "ball freeze" animation on the DMD (this only happens when the magna save fails to catch the ball) as if the ball drained, but the animation ended early and no additional ball was fired, i believe because the ball in play hit a target in the middle of the animation which canceled the ball save... i think...

So this is making me think i may be adjusting the wrong switch. Tonight I am planning on adjusting the first switch to raise the roller so that it would need more pressure to trigger. I'm thinking that it may be 'bouncing' as the balls trigger it so it actually triggers twice.

I'm getting close to just buying 5 replacement switches and diodes and swapping them all out. Buy I want to try and fix it first if I can. Any tips on a local place where I could pick these parts up in the Milwaukee area? otherwise i was just going to order from pinballLife.com. I'll pick up a multimeter on my way home, is there a risk to testing the diode while installed?
Top

Where are you located? I could possibly swing by with my multimeter and a couple of those roller switches and show you how to test everything.
Current Collection
The Simpsons Pinball Party, Genie, Pennant Fever, Sinbad, NBA Fastbreak, Williams Phoenix
Top

I'm in Brookfield, close to the corner of Capitol and Calhoun.

That would be awesome if you would be willing to do that. I'm not home tomorrow night but I should be around the rest of the week.

so i just noticed your profile says your in Helenville, so from town center its a 40 min drive to my house. If your still willing to make the drive out I would gladly get you a case of your favorite beverage, food, and\or cold hard cash!