Just got my Wonka yesterday and I have to say this is the best JJP game to date. Great flow, doesn’t feel like a chore to play, interesting shots and a lot of depth. If you have the chance find one and play it. There are a lot of locations in WI that have one. In my area, Player 2 bar has it for 50 cents a play (like the rest of there games).
Top

TomGWI wrote: ↑
Fri Jul 05, 2019 7:21 am
Just got my Wonka yesterday and I have to say this is the best JJP game to date. Great flow, doesn’t feel like a chore to play, interesting shots and a lot of depth. If you have the chance find one and play it. There are a lot of locations in WI that have one. In my area, Player 2 bar has it for 50 cents a play (like the rest of there games).

I agree with everything you've said. I'm surprised at how little this game has been talked about on pinball sites and the cool reception some people are giving it. I honestly think it's one of the best pins I've ever played and I'm glad that there are so many locations in WI to play it!
Current Collection: Rick and Morty, JPPrem, TWDLE, ACDC Prem, Alien Star, Diamond Lady, Space Invaders, Stars, Shadow, Sinbad, Eight Ball Champ.
Top

Stop it you guys - I have an empty space at the moment. Don't make me buy one. Didn't plan on a Wonka as an option

I never sell keeps and I am contemplating selling some HUO classics to fund a WONKA. Just waiting on the code
Top

I have an extra standard in stock at this moment. Thought a customer ordered it, but they decided to get the limited instead.

Not looking for a particular game right now but more remarking that it is nice that the game is getting some very positive comments here.
Positive comments from a couple folks on this site in short succession does make you stop and think about a game even if it isn't on your radar...

I'm sure Christopher will fix somebody up with that Wonka he has in stock in short order. I have bought a couple games from him and give high recommendation as others on this site will also do. He will take care of you !

Oh man that might be the tipping point knowing Chris has one on hand....

Game is sold. I will have more coming in. Limited editions are next, followed by collectors. I have a couple open spots in both allotments so let me know if you are interested.
Christopher
KingPin Games
Sales@KingPinGames.net
608-393-2299 cell
JJP Authorized, Spooky, Chicago Gaming, American Pinball, Raw Thrills, Namco, Incredible Technology, VP Caps, Elaut, Coast to Coast Entertainment
Top

Now if I can figure out why my Start Button isn't registering... (bah it was an easy fix.. haha!)
Top

One left from this lot... more on the way.

For those of you with nothing to do in the Madison Area Saturday August 24th 2-6PM... And are not going up to Titletown for the IFPA massacre (THANKS ERIC, that is twice we double book!)

The Leading Pinball Lifestyle Company in Madison is hosting the 3rd Wonka Party in the 5th most important pinball town in America, presented by the 12th most important Tournament Director in WI.

Central Waters will be bringing some super rare beer including Black Gold on tap at open. Prizes including Art Prints, Trucker Hats, Beer, Ect… We will be offering a special flight of beer that pairs with...

On the food side, the kitchen is thinking BBQ ribs…

Rumor has it Kingpin will be on hand decked out in his famous sparkling shirt and personality!

Pinball Shenanigans from 2-6 PM Saturday at the Blue Moon Bar and Grill in Madison. Come on out and hang with us!

Side Tourneys and dollar games. Beer. Chocolate. Ribs. Crisp Hi-Fives. Brought to you by the Craft Beer Pinball League and the Blue Moon Bar. 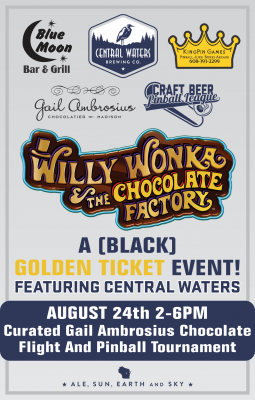 Sounds like a cool event Jim. I hope we can make it. After pulling off an event with fine chocolate and nearly unobtainable beer you will most certainly be at least the 11th most important tournament director in Wisconsin! We will be down soon to play some more Wonka.